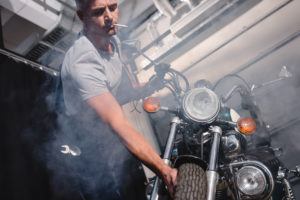 You may not realize it, but even Motorcycles have bad Smells and Odors that won’t go away. Here’s how we learned this first hand.

A family friend of mine called me saying he desperately needed some PuroClenz Standard and Mini Treatments as soon as possible. I immediately put the order together. However, I realized on my way to the Post Office that his place of business is not too far away. So, I made the decision to deliver the product myself. It would give me a chance to catch up with an old friend and see what he needed first hand. He runs a motorcycle shop so he has used spray applications of PuroClenz before, but never really put the Gas-Off treatment to use. I just assumed he was going to use it to deodorize a room or garage in his shop.

When I got there, after perusing the showroom (which looks like something out of the old show “American Chopper”), he took me to a check out a Harley Davidson Wide Glide sitting out front. This was what he needed the product for.

He told me the previous owner was getting to be too old to drive the motorcycle so it sat idly in his garage for years (I could tell because this bike was very well kept). The owner was a big smoker, but his wife would not allow him to smoke in the house. He would have to go out to his garage to smoke. After years and years of doing this, the smoke settled into the seats, saddle-bags, and the hard to reach areas of the Harley. The owner decided to finally get rid of it after 20 years of ownership and this is where it ended up.

Another employee from the shop took it for a test drive and said the odor was completely unbearable even going 60 miles per hour on the highway! My friend knew it reeked of stale cigarette smoke, but thought a quick detail could remove the nicotine residue from the bike. Unlike an enclosed space that is typical of cars, where could this odor hide in a motorcycle?

The nicotine was so embedded in the Harley, when they cleaned it, they could see the residue coming off as almost a film from the bike…truly disgusting. Even after detailing it multiple times, they could STILL smell smoke on a highway test drive.

The Secret to Deodorizing a Harley

I realized that no amount of cleaning or detailing on the exposed surfaces could solve this one, so we had to do something outside the box to handle this. He had an enclosed trailer that he used to transport his bikes around, so we pulled the Harley into that, and gassed-off a PuroClenz Auto Ultra. This problem was caused by the owner engulfing the Harley in smoke; so I knew I had to do something similar to get the smell out. I wanted to totally encompass the bike and leave it overnight, so I could know for sure that every square inch of that Harley would be exposed to PuroClenz vapor.

Next day around lunchtime, we pulled the motorcycle out of the trailer and couldn’t detect a smoke odor at all. He drove it around to make sure it stood the test of time, made it the centerpiece of his showroom, and sold it almost immediately!

Want to know more, give us a call, or drop us a email